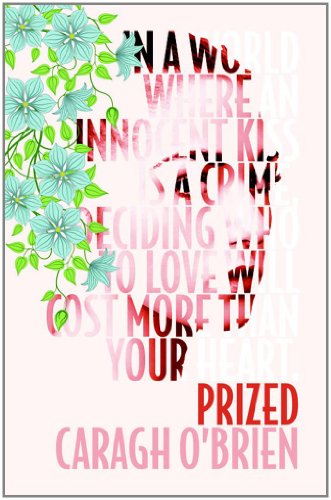 Publication: 1st November 2011
Publisher: Simon And Schuster Australia
Pages: 368
Genre: Dystopian
Age Appropriate: Young Adult
Price: $16.99
Striking out into the wasteland with nothing but her baby sister, a handful of supplies, and a rumor to guide her, sixteen-year-old midwife Gaia Stone survives only to be captured by the people of Sylum, a dystopian society where women rule the men who drastically outnumber them, and a kiss is a crime.  In order to see her sister again, Gaia must submit to their strict social code, but how can she deny her sense of justice, her curiosity, and everything in her heart that makes her whole?
My Thoughts.
Prized takes place a short while after Gaia and her baby sister leave the Enclave and make their way across the wasteland and finds herself and her sister close to death, they are picked up by an outrider who takes them to Sylum a society ruled by women.
Sylum is ruled by Matrarc Olivia where 9 out of 10 people are male but they have no rights.
The men are not allowed to touch the women or they get charged with attempted rape, men and women are only allowed to kiss once engaged and every married couple  are expected to have at least ten children in hopes to increase the female population.
Straight away Maya is taken away from Gaia and given to another family and Gaia seems to lose her identity and while in the previous book she had a fighting spirit in Prized she seems to give up and give in.
In Birthmarked Gaia wasn't attractive to anybody (besides Leon) because of the scar on her face but in Sylum she has three males interested in her.
I really liked the book as much as the first one to see Gaia become so self doubtful and not confident within herself and it isn't until Leon calls her on it she realises how lost she is.
If you're looking for a dystopian that's different from all of the others out there check this series, now I'm eagerly awaiting next year for the third in the series to come out.
I give this book 4/5.
A big thanks to Caroline @ Simon And Schuster Australia.
Posted by Unknown at 00:30