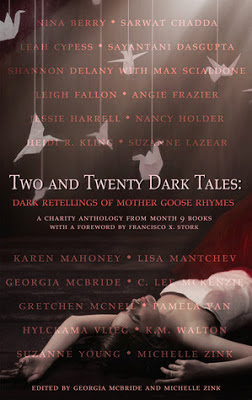 My Thoughts...
I have to start by saying that I'm a huge fan of fairytale retellings, so when I discovered this book I was pretty excited for it, not just one retelling but twenty-two of them in the one book, I was desperate to get my hands on a copy, unfortunately I didn't even like a half of them.

I was pretty sure that I knew most of the Mother Goose nursery rhymes especially as I used to own a copy of them when I was younger, but through reading this I discovered that there is a lot of them that I didn't know, maybe that was why I didn't really like most of the stories in this anthology, it could also be because the stories were so short that it was hard to connect with the characters before we were onto a new story.

But the stories I liked were:
Boys And Girls Come Out To Play - Angie Frazier
This was an interesting short story about a girl who's twin sister is in a sort of vegetative state after an accident that killed their Father, after being summoned by witches she has to take her sick sister's place, and it doesn't end well for everyone.
I Come Baring Souls - Jessie Harrell
About the Egyptian Gods Anubis, Bast and Hathor, they run a funeral home and we get to read about them taking souls into the Underworld for judgement.
Life In A Shoe - Heidi R. Kling
The tale of the woman who lived in a shoe now converted into an apartment in a dystopian society or this retelling, who's prime objective is to have all the woman have as many children as possible so the society has more people to train as soldiers to fight in their wars.
Candlelight - Suzanne Lazear
Two sisters who run away from home after they believe that their Mother is being too strict with them, do a spell that lands them in Babylon where they can do whatever they want whenever they want, but what happens when they want to return home?
Tick Tock - Gretchen McNeil
A Story of a girl who gets a babysitting job with a new family after her best-friend never showed up, but when she arrives she finds nothing but four creepy children, no parents and a really old and out of place clock.
The Well - K.M Walton
The story of Jack And Jill who live in a town where everyone has died of a virus and they were both immune, but spending all the time they have together has turned them against one another.
The Wish - Suzanne Young
A girl who has just broken up with her boyfriend makes a wish on a star, and meets a boy and falls head over heels in love with him, but not everything is what it seems.
A Ribbon Of Blue - Michelle Zink
A girl with Cerebal Palsy is told by a fortune-teller to look out for a boy with a whistle, a ticket and a ribbon of blue, and this year at the carnival she finally see's him.