Ascension (The World of Ascension #1) 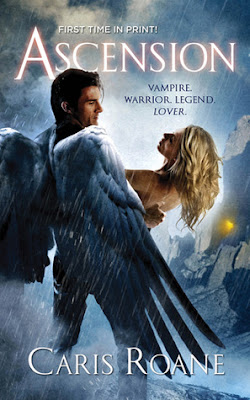 Alison Wells is no ordinary woman. Born with supernatural powers, she can never make love to a man without putting him in grave danger. But when her special vision reveals a glorious muscled man soaring overhead on mighty wings, she feels an overwhelming attraction she cannot resist—even as he tells her: "I have come for you. Your blood belongs to me."Kerrick is a vampire and a warrior who has fought his hunger for a woman's love for the past two hundred years. As a Guardian of Ascension, he is sworn to protect Alison from the death vamp armies who crave her blood and her power. But Kerrick has cravings of his own—a forbidden longing to open his heart and veins to Alison. To share his blood…satisfy his thirst…and seal their fates forever.Ascension is the first in Caris Roane's paranormal romance series thatRomantic Times calls "a series with epic potential."
My Thoughts.
This books is a fantastic start to the series, if you're a fan of the Black Dagger Brotherhood and Lords Of The Underworld, then definitely check this out.

A band of Warrior's who call themselves the Guardians Of Ascension, spend their nights keeping Mortal Earth safe from the death vamps that think of humans as nothing but food.

Alison whom is a human, has lived most of her life with supernatural abilities ranging from folding (moving from one place to another in the blink of an eye), visions and immense strength which landed her last boyfriend in the hospital, what she doesn't know is that she is about to ascend (acquire more power) and become a part of Second Earth where people like her live once they've ascended and also the home of the Warrior's.

When she is assigned Warrior Kerrick to guard her through her ascension it triggers the breh-hedden between the two of them, it occurs when two soul-mates find each other, both drawn to each others distinctive scent that only each other can smell, (every person has a unique scent), Alison's is lavender whilst Kerrick's is Cardamon, but with them both fighting their attraction to each other because of past relationships, and the leader of the death vamps Greaves only to happy to acquire Alison for himself the battle is on to get her through her ascension and away from Greaves clutches.

I cannot wait to continue on with this series, if you like your paranormal romances with hot alpha males and steamy love scenes then pick this book up.