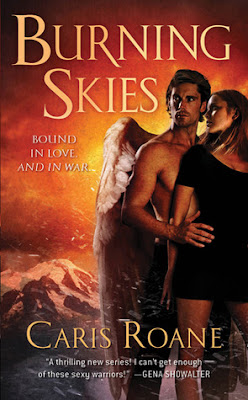 A vampire warrior in exile, Marcus Amargi resists the call to return to the ranks of the Guardians who fight the death vamp armies. Here on Mortal Earth, Marcus has another battle on his hands—the seductive lure of Havily Morgan. The woman meant for him. Whose blood he craves. The one who comes to him in dreams—and demands his surrender…A beautiful immortal with extraordinary powers, Havily lives in the realm of Second Earth but, in her fantasies, yearns for her winged lover Marcus. Soon, their bond will be put to the ultimate test. When their bloodthirsty enemies set the night on fire with sky-blazing weapons, Marcus and Havily must unite body and soul, to unleash the full power of their passion—and fight fire with fire…
My Thoughts.
This is the second book in the Guardian Of Ascension series and focuses on the relationship of Warrior Marcus and Havily.

We saw the start of the breh-hedden in the first book Ascension, and I love that we find out who the next couple will be in each book.

Taking place a few months from the end of the previous book, Marcus has returned to Mortal Earth but every night since he has been visited by Havily for some steamy moments, Havily whom thinks of him as a deserter after having left Second Earth and the band of Warrior's that he used to fight with, believes that these nightly visits are just dreams, but when she discovers that it is real and is in fact a new power among many emerging powers then she is assigned Marcus to guard her after it's discovered Greaves and his associate Crace are after her.

With both of them not wanting a relationship with each other afraid to get their hearts broken again if one of them should die, they agree to a physical relationship, but how long will it be until one of them will admit to their growing feelings towards one another?

I love the breh-hedden that started in this book between Medichi and Parisa and I can't wait to get to their book, and I'm very interested to find out more about her ascendance.

Full of lots of steamy scenes, action and adventure, this is a great instalment to this series.