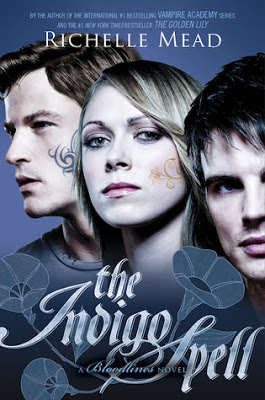 by Richelle Mead
Publication: 12th February 2013
Publisher: Penguin Books Australia
Pages: 401
Genre: Paranormal
Age Appropriate: Young Adult
In the aftermath of a forbidden moment that rocked Sydney to her core, she finds herself struggling to draw the line between her Alchemist teachings and what her heart is urging her to do. Then she meets alluring, rebellious Marcus Finch--a former Alchemist who escaped against all odds, and is now on the run. Marcus wants to teach Sydney the secrets he claims the Alchemists are hiding from her. But as he pushes her to rebel against the people who raised her, Sydney finds that breaking free is harder than she thought. There is an old and mysterious magic rooted deeply within her. And as she searches for an evil magic user targeting powerful young witches, she realizes that her only hope is to embrace her magical blood--or else she might be next.Populated with new faces as well as familiar ones, the Bloodlines series explores all the friendship, romance, battles, and betrayals that made the #1 New York Times bestselling Vampire Academy series so addictive—this time in a part-vampire, part-human setting where the stakes are even higher and everyone’s out for blood.
My Thoughts.
Richelle Mead has got to be one of the most gifted authors around, with her ability to capture your attention and emotions so completely whilst reading one of her books, that you feel a loss once the book comes to an end.
While quite a few authors release subsequent books in a series that aren't up to par with the first book, Mead has the ability of writing books that get better with each new release, she could write a shopping list and I'd probably find it fascinating!
I was so excited to receive an e-galley of this book, I've read every series that Mead has written so to receive an arc of one of her books was very exciting to me, and as always this book was brilliant and had me doing a happy dance, those who've read it already know what I'm talking about.
I love these characters, I'm a HUGE Adrian fan, he's a favourite of mine from the Bloodlines and Vampire Academy series, his one liners have me in stitches, and I can never get enough of his wit.
After the ending we were left with in The Golden Lily I was a bit upset, to be teased the way we were and then to have it taken away from us was cruel, but Richelle after this book all is forgiven. *Smiley Face*.
Sydney's on the search for Marcus Finch, a former Alchemist whom she hopes will help her, Miss Terwillger's sister is going around sucking the youth out of young witches to stay young and Sydney's persuaded to help her find the possible victims beforehand, we have a wedding and some cameos from characters of the Vampire Academy series and of course what we're all reading this series for SYDRIAN (Sydney and Adrian).
I'm not going to say anything else about this book because I don't want to spoil it for anybody, but I strongly suggest that everybody pick this up A.S.A.P, you won't be disappointed.
Another stroke of genius from Richelle, highly recommended.
I give this 5/5.
Posted by Unknown at 23:34