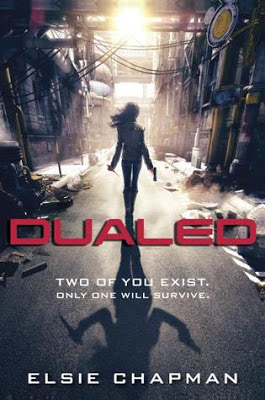 by Elsie Chapman
Publication: 26th February 2013
Publisher: Random House Books For Young Readers
Pages: 304
Genre: Dystopian
Age Appropriate: Young Adult
You or your Alt? Only one will survive.
The city of Kersh is a safe haven, but the price of safety is high. Everyone has a genetic Alternate—a twin raised by another family—and citizens must prove their worth by eliminating their Alts before their twentieth birthday. Survival means advanced schooling, a good job, marriage—life.
Fifteen-year-old West Grayer has trained as a fighter, preparing for the day when her assignment arrives and she will have one month to hunt down and kill her Alt. But then a tragic misstep shakes West’s confidence. Stricken with grief and guilt, she’s no longer certain that she’s the best version of herself, the version worthy of a future. If she is to have any chance of winning, she must stop running not only from her Alt, but also from love . . . though both have the power to destroy her.
Elsie Chapman's suspenseful YA debut weaves unexpected romance into a novel full of fast-paced action and thought-provoking philosophy. When the story ends, discussions will begin about this future society where every adult is a murderer and every child knows there is another out there who just might be better.
My Thoughts.
Elsie Chapman has created a fresh and exciting new world that will keep you transfixed until the nail-biting end.
I love the concept of this book, the fact that your Alt (twin born to different parents) is the one that will be ordered to kill you, anywhere between the ages of 10-20 you will be visited by someone from The Board (the people in charge of the city) who will then activate the order, and it's kill or be killed, only one will be left standing, you are given a month and if neither one nor the other is dead in that time then you will both be terminated.
Only the Alt that wins is allowed a proper education, job, marriage and kids, the Completes (Alt's that have won) are allowed the best that life can provide.

After a tragedy that affects West considerably she has almost given up on life, and then she gets activated to destroy her Alt, but with the guilt that she's feeling over the tragedy she thinks that maybe she's not the better version of herself, so it's up to Chord (her brother's best-friend) to convince her to fight for her life just like she convinced him to do when he was activated feeling the exact same way.

I'm intrigued to see how this will be carried on as a series, this book ended perfectly so I would have been happy just to have it as a stand-alone novel, so I wonder.