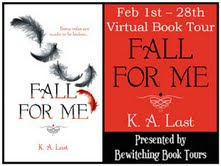 Fall For Me (The Tate Chronicles #1) “Angels aren’t supposed to fall in love, especially with each other. But for the record, you were worth it.”
Grace Tate is a Protection Angel and Vampire Hunter, and she has always followed the rules. But some rules are made to be broken…
Until now the fight against evil has been simple, and falling in love was never part of the plan. So what happens when it’s beyond Grace’s control, and when she least expects it she falls for the wrong person?
All hell breaks loose, that’s what.
At Hopetown Valley High, not everything is as it seems, and the one person Grace thought was her enemy becomes her most important ally.
Blood will be shed, lives will be lost and friendships will be tested. It all comes down to one decision, and when Grace tries to save all those dear to her, she realises not everyone can be—or wants to be—saved.
My Thoughts.
I'm a huge paranormal genre fan, any kind of supernatural entities and I'm pretty much guaranteed to read it, this time we are focusing in Angels And Vampires.
Grace is a Protection Angel, destined to be reborn into the Tate family over and over to protect them in their jobs as Vampire Hunters, Grace in this lifetime has a twin brother Archer, they are the only two Tate's left in this generation.
One night while patrolling they come across a girl Charlotte, who they realise is a Vampire, but Grace who has the ability to read minds discovers that she has a pure soul and has never ever killed a human being, intrigued they seek her out never realising the huge secret that she is hiding will change both of their lives forever.
Told in alternating perspectives each chapter, the other character sharing their story in the book is Josh, a human who has had a crush on Grace for years, and she for him but being together with a human is forbidden.
Rounding out the cast is Fallen Angel Seth, whom Grace used to be friends with back before he fell and who nowadays spends his days hanging around with Vampires, but there is a story as to why he fell, their story is told in the prologue, also featured are the respective best-friends of said chapter holders Emma and Ryan, their lives will also be impacted in a major way in this book.
I'd be very interested to see where the next book and the rest of the series goes, a good quick read, ready to pique your interest in the lives of the Tate family.
I give this 3.75/5.

Guest Post.
Hi Sarah, and thanks for having me at your blog today. Since today is Valentine’s Day I thought I’d talk about the one thing every girl loves to get from their beloved (apart from flowers). Jewellery!

Throughout Fall For Me, rings play a pretty important part. Grace wears a ring on her right hand as a symbol of her connection and devotion to Heaven. The traditional symbol of eternity lies within it, the never-ending circle that represents union, love and unyielding faith. All the angels in my world are given a ring when they first come into creation and each ring—like each angel—is unique. The rings also play another very important part in the story, but you’ll have to read the book to find out what it is!

Grace actually has two rings in Fall For Me. Her creation ring is a blue sapphire surrounded by flowing curves that look like wings. 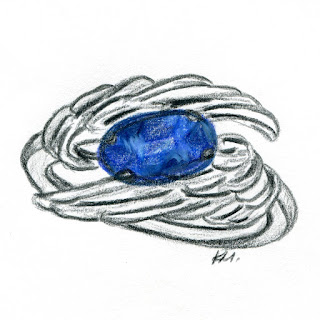 And, Josh gives Grace a ring at some stage during the story. It’s also a sapphire and has a sparkling diamond on either side. He has his name engraved on the inside of the band for her. 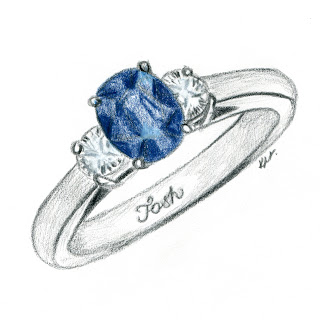 The other great thing about Valentine’s Day is, of course, kissing! I’d love to share with you Grace and Josh’s first kiss in Fall For Me.

This teaser is from Chapter Fifteen, and from Josh’s point of view.

Grace turned her face up to mine and finally I felt the velvet soft touch of her lips. We both trembled as our bodies intertwined. Grace ran her hands up my neck and curled her fingers into my hair. Nothing else mattered and we were lost in one another. I moved my hands from her waist around to her back then traced the line of her spine up to her wings, ever so gently caressing them. Grace tilted her head back and I placed feather light kisses down her neck to her collar bone then back up the other side.

“You are heaven in the flesh,” I whispered, gazing into her sparkling blue eyes.

Grace smiled and more tears spilled down her cheeks, shimmering in the sunlight like tiny flecks of quartz. I kissed her again, only this time with a hunger so intense I never wanted it to end.

Thank you again for having me today, Sarah. I hope everyone has a wonderful Valentine’s Day.
K x
a Rafflecopter giveaway

K. A. Last was born in Subiaco, Western Australia, and moved to Sydney with her parents and older brother when she was eight. Artistic and creative by nature, she studied Graphic Design and graduated with an Advanced Diploma. After marrying her high school sweetheart, she concentrated on her career before settling into family life. Blessed with a vivid imagination, she began writing to let off creative steam, and fell in love with it. She now resides in a peaceful leafy suburb north of Sydney with her husband, their two children, and a rabbit named Twitch.