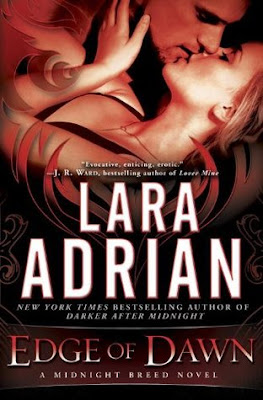 Twenty years after the terror of First Dawn—when mankind learned that vampires lived secretly among them—the threat of violence reigns as the two species struggle to coexist. The only group preserving the fragile harmony is the Order, an elite cadre of Breed warriors dedicated to protecting humans and vampires alike. And in this precarious world of torn loyalties and shattered trust, Mira, a fiery squad captain, finds that every fight bears an intensely personal cost.

Raised among the Order, Mira has always believed in the warrior’s code of swift—and even lethal—justice. But the one thing she desires more than the Order’s hard-won acceptance is Kellan Archer, a sexy but troubled Breed fighter. In love with him since childhood, Mira once broke through his tough exterior during an unexpected night of rapture, but the next day he mysteriously disappeared, never to return.

Kellan didn’t think he would ever see Mira again—or have to confront the truth of why he left. After abandoning the Order years ago, he now leads a band of human rebels intent on carrying out their own vigilante rule of law. Yet a high-profile kidnapping assignment brings him face-to-face with the past he sought to avoid, and the striking woman he has tried desperately to forget. And as tensions mount and the risk of bloodshed grows, Kellan and Mira must take sides—between the competing missions that dominate their lives, and the electrifying passion that claims their hearts.
My Thoughts.
I have to start by saying that I'm a huge fan of this series, but unfortunately I didn't enjoy this book as much as I did the previous ten books in the series back when the focus was on the original Breed brothers, the jump in time I felt has lost the magic and enjoyment of the series that I used to have.
Don't get me wrong I'm not saying that this is a bad book but throughout the whole story all I kept wondering was when there was going to be another appearance from one of the brother's, that was the main reason that I was desperate to get my hands on a copy, I know that it's set in the future and the characters that were kids in the first ten books are now the main focus but I found that I didn't really care about these characters as much, I did like Mira and Kellan and even Nathan in the previous books as kids but I just wish that Lara could have continued on the series somehow without the twenty year jump.
I feel like we've missed out on a lot of background information on the brothers and new characters that I would have loved to discover as they were growing up, not as they are now, but there were some positives which were the appearances of all the brothers even though they barely got any page time which I hated and which has taken my rating down a lot for their rare but longed for appearances.
I'm happy that the next book will be Nathan's I really do like his character and I hope that Hunter will have a lot more scenes in the story and with Nathan, actually I just hope it's original brother's heavy with appearances.
As much as I was disappointed with this book I will continue on with this series for the fleeting glimpses of the brother's that had me falling in love with the series in the first place.
I give this 3/5 Stars.