by Chelsea M. Cameron
Publication: 20th April 2013
Publisher: DRC Publishing
Pages: 450
Genre: Contemporary Romance
Age Appropriate: New Adult
Buy It:  Amazon & Barnes and Noble
Katie Hallman is done with douchebags. Done with guys who treat her like crap and leave her broken. But then Stryker Grant is there anyway. With his numerous piercings and bleached hair, he’s the polar opposite of all of her past relationships, which makes him the perfect candidate.At first, Katie just sees him as a physical escape from her previous rocky relationship, and Stryker doesn’t seem to mind just being a distraction from Katie’s problems. But soon he’s getting under her skin, peeling back layers she’d rather keep covered. She tries to make it clear that she doesn’t want a relationship, but keeps breaking her own rules.Then a tragedy sends Katie into the only arms who are there to catch her, and she’ll realize that she needs him more than she ever thought possible. But is she ready to let herself trust another guy with her already-battered heart? Or will she push him away to protect herself from getting hurt again?
My Thoughts.
Faster We Burn is the sequel to Deeper We Fall in the Fall And Rise series by Chelsea M. Cameron.
While I really did like this book I did prefer the first book more, I felt that the obstacles that Katie and Stryker had to overcome in this story were nowhere near as challenging or complicated as Lottie's and Zan's were in Deeper We Fall.
We saw this couple's first meeting and interaction in the first novel, and throughout their book the sparks were definitely flying giving us some steamy moments between these two and their 'friends with benefits' deal, but then they both find themselves developing feelings for each other, but with Katie still dealing with the aftermath of her relationship with Zack, she's not ready for another boyfriend, even though she knows that Stryker isn't and never will be anything like Zack. 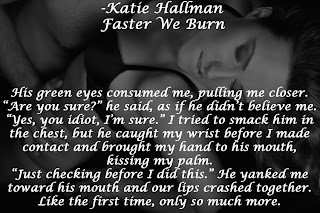 With Katie's family not exactly welcoming when Stryker spends Thanksgiving with her at her house, the odds seem to be stacked against them, but these two belong together and they will fight to make that possible, trying to rid themselves of their demons to become a couple and to become the people that they were meant to be.
All the characters in this book that were in the debut made their appearance, one complaint I have is that there wasn't really that much Zan, with him being Stryker's friend I expected a whole lot more of him, we saw a lot of Lottie who is Katie's best-friend and roommate that's why I couldn't really understand the lack of interaction between these two, but that's just me being picky.
I'm hoping that this series will continue and perhaps have a book featuring Lottie's twin brother Will and Audrey who runs a bit hot and cold, and I just know that there's a story behind why she's like that.
If you like contemporary romance books and are a fan of the new adult genre then definitely pick this series up.
I give this 4/5.
Quotes.
“You drive me insane because you never know what you want and you expect me to just accommodate you. And I do it. Every time. You say jump and I get out a goddamn trampoline. When I'm not with you, I'm thinking about you. I can't stop thinking about you and wanting you. I want to walk across this room and do what you want, but I can't. I can't fuck you anymore.'
'Why not?'
'I can't just fuck you because I love you!”
“I love you so much, sweetheart. So much that sometimes I can't breathe. I can't think. You're all I've ever wanted, even before I knew I wanted it. I don't deserve you, Katherine.”
About Chelsea.

Chelsea M. Cameron is a YA/NA New York Times/USA Today Best Selling author from Maine. Lover of things random and ridiculous, Jane Austen/Charlotte and Emily Bronte Fangirl, red velvet cake enthusiast, obsessive tea drinker, vegetarian, former cheerleader and world's worst video gamer. When not writing, she enjoys watching infomercials, singing in the car and tweeting (this one time, she was tweeted by Neil Gaiman). She has a degree in journalism from the University of Maine, Orono that she promptly abandoned to write about the people in her own head. More often than not, these people turn out to be just as weird as she is.Her New Adult Contemporary Romance titles include My Favorite Mistake, which has been bought by Harlequin along with a sequel, Deeper We Fall and Faster We Burn (April 20, 2013)Her Young Adult books include Nocturnal, Nightmare and Neither, the first three books in The Noctalis Chronicles. The fourth and final book, Neverend will be out in 2013. Whisper, the first in The Whisper Trilogy is also available, with the second book in the series, Silence and the final book, LIsten coming out in 2014.