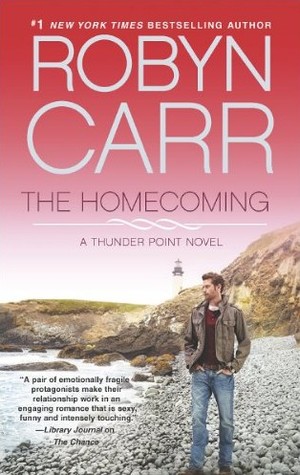 by Robyn Carr
Publication: 26th August 2014
Publisher: Harlequin MIRA
Pages: 400
Genre: Contemporary Romance
Age Appropriate: Adult
Buy It: Amazon + Barnes & Noble + The Book Depository
In a small town, reputation is everything. In her latest novel, #1 New York Times bestselling author Robyn Carr explores the burden placed on a young man returning home to face his mistakes—the first step in claiming the life he was meant to live ... At the age of nineteen, Seth Sileski had everything. A superb athlete and scholar, handsome and popular, he was the pride of Thunder Point. Destined for greatness, he lost it all in a terrible accident that put an end to his professional football career when it had barely begun. The people in his hometown have never forgotten what might have been. Seth has come to terms with the turns his life has taken. But now he's been presented with an opportunity to return home and show his father—and the people of Thunder Point—he's become a better, humbler version of his former self. Winning over his father isn't the only challenge. Seth must also find a way to convince his childhood neighbor and best friend, Iris McKinley, to forgive him for breaking her heart. With his homecoming, will Seth be able to convince the town, his family and especially Iris that he's finally ready to be the man who will make them all proud?
My Thoughts.
The Homecoming by Robyn Carr is a delightfully heartwarming instalment in the Thunder Point series, focusing on the relationships of the locals of a small town, with each book featuring a different couple, we also get point of views of various residents throughout the book.

Seth Sileski is back in town as the new Deputy after years away, wanting to reconnect with his childhood best-friend Iris McKinley the local school counsellor, years ago when they were both teenagers a misunderstanding tore these friends apart and Iris hasn't spoken to him since, but Seth is determined that the girl he fell in love with years ago will hopefully return his feelings.

Filled with romance, action and drama this may just be my favorite book of the series so far, Robyn has created a cast of characters that will keep you entertained and happy to be back in Thunder Point, these books I easily finish in one sitting, I always know that when I pick up a book in this series I'm in for a good time.

I look forward to the next book,  the next couple as well as my next visit to Thunder Point.