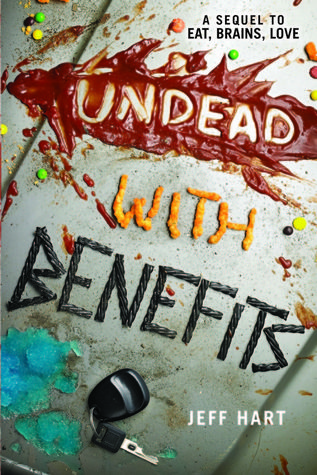 by Jeff Hart
Publication: 26th August 2014
Publisher: HarperTeen
Pages: 416
Genre: Horror
Age Appropriate: Young Adult
Buy It: Amazon + Barnes & Noble + The Book Depository
The living dead are living it up in this hilarious and surprisingly romantic sequel to Eat, Brains, Love, which Kirkus Reviews called “one hell of a road trip...funny, gross, and scary in equal, alternating measures."Jake and Amanda are in love, on the run—and undead. They've teamed up with Cass, who’s ditched her former job as shady government psychic zombie-tracker, and they're headed across the border into Iowa, where there’s rumored to be a zombie cure.Armed with a trunk full of guinea pigs (aka zombie snacks), they're ready to take on the Midwest’s first undead warlord, the psycho psychic out for their blood, and their own superawkward love triangle. But the virus is spreading faster than you can say "zombie apocalypse," and Jake, Amanda, and Cass have to find the cure—if it even exists—before the whole state of Iowa goes up in flames. With its heartwarming blend of guts, romance, and spot-on teen humor, this road trip–ready paperback original is perfect for fans of Isaac Marion's Warm Bodies and AMC’s The Walking Dead. Readers will devour Jeff Hart's fresh, funny, and irreverent take on love and life (well, unlife) in an eat-or-be-eaten world.
My Thoughts.
Undead With Benefits is a hilariously entertaining zombie story, full of humour and action which is a delightful sequel to Eat, Brains, Love.

We catch up with Jake, Amanda and absconded former government psychic Cass, as they take a road trip to Iowa where they hope to find the cure for their 'zombieness' before both Jake and Amanda become mindless ghouls, Cass wants the cure purely for the fact that the evil Alastaire is blackmailing her, the cure in exchange for the safety of her Mother.

Once arriving in Iowa they discover that the state is infested with zombies and ghouls, led by the self-appointed Lord Of Des Moines, who has hidden the cure and decides who will or won't receive it.

There is an interesting dynamic in this book, Jake ends up separated from Amanda and Cass and meets and befriends Reggie, a zombie who is a gamer and stoner like Jake who also has another identity, one that comes as a bit of a surprise.
This also leaves the girls stuck together which makes for some entertaining scenes (cat-fight anyone?)

I really enjoyed this book, and I can't wait to see just what happens in this series next, the concept and  storyline, make for a YA series that will have you laughing out loud at the dialogue and witty one liners. 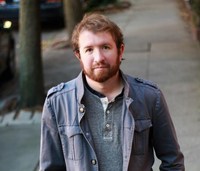 Jeff Hart is originally from Rochester, NY, and now lives in Brooklyn. EAT, BRAINS, LOVE is his first novel.