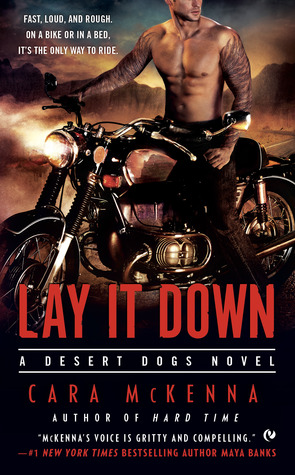 by Cara McKenna
Publication: 5th August 2014
Publisher: Signet Eclipse
Pages: 336
Genre: Contemporary Romance
Age Appropriate: Adult
Buy It: Amazon + Barnes & Noble + The Book Depository
Backbreaking days, wild nights, and the hard hum of steel between your thighs...That’s a life well lived, according to the Desert Dogs—four friends who call Fortuity, Nevada, their badlands home.Vince Grossier is the self-crowned outlaw king around here. But when Fortuity’s slick new mayor invites a casino development to town, greed isn’t far behind—and it claims Vince’s good friend as its first casualty. With the law turning a blind eye to the mysterious death, Vince must seek his own brand of justice. The pretty photographer hired by the developers might be the key to uncovering the truth. And she’s a temptation too good to pass up.Finally free of a controlling ex, Kim Paget’s not looking to be taken for a ride—not on the back of some tattooed roughneck’s bike and definitelynot in his bed. But when she uncovers evidence supporting Vince’s suspicions of murder, Kim must entrust her safety to a man whose body threatens danger of a whole different kind.
My Thoughts.
Lay It Down by Cara McKenna is the debut novel in an all new series about a group of friends who form a bikie gang called the Desert Dogs lead by bad boy Vince Grossier.

In Fortuity Nevada, the town is soon to be home to an all new casino which has most of the residents up in arms, when Vince's friend Alex the towns Deputy contacts him one night spooked about something involving bones that he saw at the dig sight of the future casino he becomes concerned, especially when Alex is killed in a car accident that night and alcohol is blamed, Vince knowing that his friend would never drive drunk becomes suspicious, but nobody is willing to listen to him.

When Kim a photographer is sent to Fortuity to take site photos to promote the area and upcoming casino she runs into Vince, fresh from a break-up she's not looking for any kind of a relationship, but neither is Vince, as they start to spend more and more time together they'll discover that between the attraction and the chemistry something more may be developing.

When Kim is unintentionally drawn into Vince's investigation of Alex's death will she find herself in danger, or will Vince keep her safe at all costs?

Having never read a book featuring bikie gangs or especially one as a main character, I was a bit hesitant, but the synopsis drew me in and I can say that I found this to be quite an enjoyable contemporary romance filled with action, suspense, mystery and some steamy red hot sex scenes, that will leave you hot under the collar.

I look forward to the next book and the rest of the series.

Cara McKenna writes smart erotica—sexy stories with depth. A little dark, a little funny, always emotional. She also writes red-hot romance under the name Meg Maguire. Her wonderful publishers are Ellora's Cave, Harlequin Blaze, Penguin / InterMix, Samhain, and Signet Eclipse. She loves writing sexy, character-driven stories about strong-willed men and women who keep each other on their toes, and bring one another to their knees.

Before becoming a purveyor of red-hot romance and smart erotica, Cara was a record store bitch, a lousy barista, a decent designer, and an over-enthusiastic penguin handler.
Cara now writes full-time and lives in the Pacific Northwest with her bearded husband. When she's not trapped in her own head she can usually be found in the kitchen, the coffee shop, or jogging around the nearest duck-filled pond. She is a very proud member of the Romance Writers of America® and its New England Chapter. She was a 2010 Golden Heart® finalist, a 2012 Golden Leaf finalist, and a 2011 and 2013Romantic Times Reviewers' Choice Award nominee.
Have questions or comments? Email her! You can also find Cara on Twitter, Cara on Goodreads and Meg on Goodreads. And if you play Words With Friends, feel free to challenge Cara to a game—her user name is caramckenna.