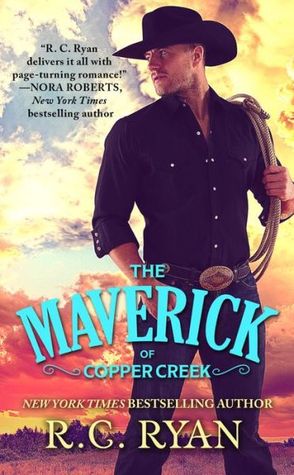 by R.C. Ryan
Publication: 30th September 2014
Publisher: Forever
Pages: 400
Genre: Western Contemporary Romance
Age Appropriate: Adult
Buy It:  Amazon Barnes&Noble  Books A Million
In the New York Times bestselling tradition of Linda Lael Miller and Diana Palmer, comes R.C. Ryan's stunning new western trilogy about the MacKenzie brothers of Copper Creek, Montana.First love always burns hotter . . .Ash MacKenzie broke his share of hearts when he left Copper Creek all those years ago and struck out on his own. Tall, tough, and proud. That's how Brenna always remembered him, and from the looks of things, he hasn't changed much. Once, she thought he could save her—whisk her away from her rough childhood home and start fresh together. Now she knows better . . .Ash isn't planning to stick around town long. As soon as he uncovers the truth about his father's death and makes sure the family ranch is safe, he'll be back out on his own. And then he runs into Brenna Crane. It broke his heart to leave her once—a herd of stampeding horses couldn't make him do it again. But Brenna has made a new life for herself, one that doesn't include him. Now he just has to convince her to give their first love a second chance.
My Thoughts.
The Maverick Of Copper Creek is the first book in an all new western romance series.

At the age of nineteen Ash MacKenzie left home after one too many fights with his Father, Bear MacKenzie, eventually settling down on his own ranch in Wyoming.

The story skips forward ten years and we're there when Bear is shot and killed by an unknown assailant, when Ash hears the news he rush's home to Montana and the family ranch that he hasn't been back to once since the day he left, running into his best-friend and first love Brenna, he discovers that she's now engaged and has moved on with her life, after seeing her Ash realises that his feelings for her haven't changed one bit.

With the mystery of Bear's murder and with no idea of a motive in why he was killed, suspects are hard to find, there also seems to be someone targeting Brenna, with no enemies that she's aware of and the incidents only increasing and getting worse, will Ash and Brenna discover who is behind all this before someone's life is lost?

I've become a big fan of western romances lately and this is another great addition to the genre, with a great cast of characters who all gather when there's somebody in need and made this book a joy to read.

I look forward to further books in the series and of course more of the MacKenzies. New York Times bestselling author R.C. Ryan has written more than ninety fiction novels, both contemporary and historical.  Quite an accomplishment for someone who, after her fifth child started school, gave herself the gift of an hour a day to follow her dream to become a writer.  In a career spanning more than twenty years, Ms. Ryan has given dozens of radio, television, and print interviews across the country and Canada, and has been quoted in such diverse publications as the Wall Street Journal and Cosmopolitan.  She has also appeared on CNN News, as well as Good Morning America.  R.C. Ryan is a pseudonym of New York Times bestselling author Ruth Ryan Langan.