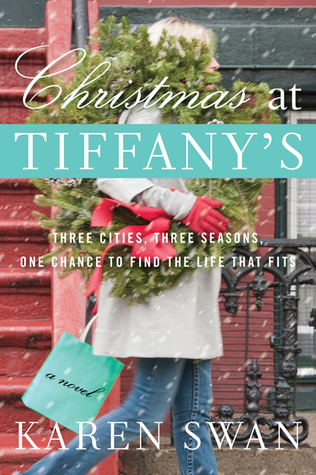 by Karen Swan
Publication: 28th October 2014
Publisher: William Morrow Paperbacks
Pages: 592
Genre: Chick-Lit
Age Appropriate: Adult
Buy It: Amazon ☀ B&N ☀ Book Depository ☀ Goodreads
What do you do when the man you pledged your life to breaks your heart and shatters your dreams? You pack your bags and travel the big, wide world to find your destiny--and your true love . . .Ten years ago, a young and naive Cassie married her first serious boyfriend, believing he would be with her forever. Now her marriage is in tatters and Cassie has no career or home of her own. Though she feels betrayed and confused, Cassie isn't giving up. She's going to take control of her life. But first she has to find out where she belongs . . . and who she wants to be.Over the course of one year, Cassie leaves her sheltered life in rural Scotland to stay with her best friends living in the most glamorous cities in the world: New York, Paris, and London. Exchanging comfort food and mousy hair for a low-carb diet and a gorgeous new look, Cassie tries each city on for size as she searches for the life she's meant to have . . . and the man she's meant to love.
My Thoughts.
One of the best surprises as a reader is when you pick a book up thinking this'll be alright, not expecting to be blown away by how fantastic it ends up being, and that's just what Karen has done here, truth be told I was expecting a fluffy and typical chick-lit story instead I got so much more, once I started this book it was so hard to put it down again.

On the night of her tenth wedding anniversary Cassie discovers that not only has her husband been cheating on her with one of her best-friends but they also have a three year old son, devastated she makes a plan with her three childhood best-friends to spend four months with each of them, Kelly in New York, Anouk in Paris and Suzy in London, along the way Cassie finds heartbreak, happiness and love as she discovers herself and the person she's meant to be, with a cast of characters that are entertaining and uniquely different from each other and the landscapes of three big cities around the world as this stories backdrop.

With vivid descriptions, a great storyline and in Cassie a heroine that I can surely relate to, this book will keep you entertained and completely absorbed as Cassie finds herself in the experiences she has throughout.

I will be sure to pick up any other Karen Swan books that I come across, and keep an eye out for further releases.

A great Christmas read, I definitely recommend this one.

Karen Swan began her career in fashion journalism before giving it all up to raise her three children and an ADHD puppy, and to pursue her ambition of becoming a writer. She lives in the forest in Sussex, writing her books in a treehouse overlooking the Downs. Her first novel, Players, was published in 2010, followed by Prima Donna and Christmas at Tiffany’s in 2011.
Website • Twitter • Facebook • Goodreads