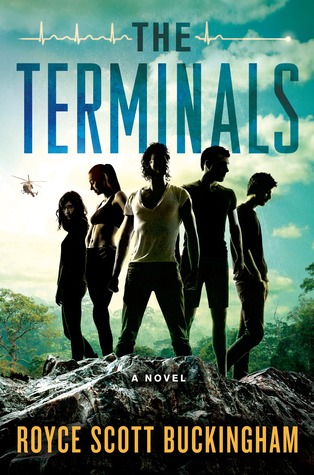 When 19 year-old Cam Cody is diagnosed with a terminal illness, he expects to spend the rest of his shortened life in an adjustable bed. Then one night, a mysterious man offers Cam one chance to join a covert unit of young “terminals.” They are like him, only they spend the last year of their lives executing exciting and dangerous missions to make the world a better place.

With nothing to lose, Cam is in.

A helicopter flies Cam to a secret tropical location, where he’s tossed out with a parachute and an instruction manual. After a rough landing, he meets his nine teammates. The other terminals don’t seem sick; Zara is beautiful, Donnie is an amazing athlete, and Calliope sings like a bird. He soon learns that they’re enhanced with an experimental super steroid TS-8, which suppresses their illnesses’ symptoms and heightens their physical and mental abilities. It’s also fatal if taken for more than a year.

Cam joins this extreme spy team, and they begin pulling dangerous operations in multiple countries. As his teammates fall around him, he starts to receive cryptic messages from a haggard survivor of last year’s class hiding in the forest. She reveals that the program isn’t what it seems, leading Cam to question whether any of them are really sick at all.
My Thoughts.
The Terminals is an action packed, pulse-pounding young adult thriller that will keep you on the edge of your seat until you reach the very end.

Nineteen year old Cam is told that he has an inoperable brain tumor and has a life expectancy of about a year left to live, when he is approached by a stranger to spend the last year of his life training to spy and undertake missions to save innocent people he jumps at the chance, wanting to know that he spent the time he has left doing something worthwhile.

When he arrives at base he meets the other nine teens on his team, all around the same age, all with the same brain tumor, but these nine are also taking a drug TS-9 which enhances their natural abilities, once training is over the missions begin and it's not long before Cam's teammates start dropping like flies, when a survivor from  the previous year's team Siena who has been hiding in the forest all this time explains what happened to her and what's really going on with the program, will Cam find a way to escape before he finds himself dead just like his teammates?

The ending was left open ended which I don't mind if I know that there will be another book but so far I've seen nothing to suggest that there is going to be a sequel.

This was such a great book, I finished it in one sitting, it was very enjoyable.

Royce Buckingham is an American fantasy writer with an English degree from Whitman College and a Law degree from the University of Oregon. In 2006, Royce sold his first novel, the middle grade fantasy DEMONKEEPER, to Penguin, Putnam. His screenplay for DEMONKEEPER then sold to 20th Century Fox.
In his debut, Royce made reading lists, garnered good reviews, and hit the bestseller list overseas in Germany. DEMONKEEPER (DAMLICHE DAMONEN) sold over 100,000 copies for Random House, Penhaligon, who then commissioned a trilogy.
In the meantime, Royce wrote two more middle grade novels for Putnam—GOBLINS, and his ghost story, THE DEAD BOYS, which was a Junior Library Guild selection. THE DEAD BOYS won the 2014 Washington State Sasquatch Book Award and has been a nominee for state reading lists in Florida, Louisiana, Oklahoma and New Hampshire.
Royce’s next two U.S. books are with Saint Martin’s Press – a YA thriller, the Terminals, which will be released October 2014, and a legal thriller – due out in 2015.
He is currently writing the third installment of his bestseller Die Karte Der Welt (Mapper) for Random House (Penhaligon) in Germany, his first medieval series.
In addition to writing books, Royce works as a prosecuting attorney. Royce is represented by Baror International and lives with his family in Bellingham, Washington.
Website + Twitter
Posted by Unknown at 18:52