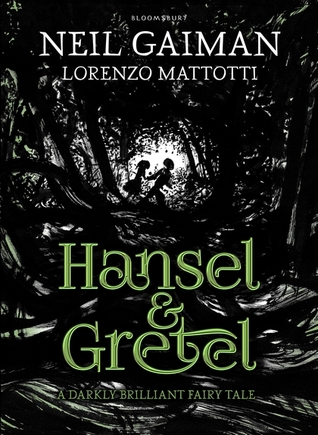 by Neil Gaiman, Lorenzo Mattotti
Publication: 11th December 2014
Publisher: Bloomsbury
Pages: 56
Genre: Fantasy/Fairytale
Age Appropriate: Young Adult
Buy It:  Book Depository + Amazon + Barnes & Noble
The enduring story of the children, the breadcrumb trail and the gingerbread house is brought to life by master storyteller, Neil Gaiman. Who better to retell the Brothers Grimm's greatest, and perhaps darkest, fairy tale, Hansel and Gretel? Coupled with breathtakingly haunting illustrations from Lorenzo Mattotti, you will be enticed into the world and into the woods . . . so beware.
My Thoughts.
While this was a very short book I still found it extremely enjoyable.

It's been many years since I've read the Hansel and Gretel fairytale, but I did notice a few subtle differences here and there.

With black and white illustrations throughout this book it's gorgeously packaged inside and out.

A dark and creepy fairytale that comes through in not only the writing but also the pictures.

While this was the first book of Neil Gaiman's I've ever read I'm intrigued enough to pick up some of his other books and give them a go.

But for fans of Neil definitely add this to your tbr pile you won't be disappointed. Beginnings
Neil Gaiman was born in Hampshire, UK, and now lives in the United States near Minneapolis.  As a child he discovered his love of books, reading, and stories, devouring the works of C.S. Lewis, J.R.R. Tolkien, James Branch Cabell, Edgar Allan Poe, Michael Moorcock, Ursula K. LeGuin, Gene Wolfe, and G.K. Chesterton.  A self-described “feral child who was raised in libraries,” Gaiman credits librarians with fostering a life-long love of reading: “I wouldn't be who I am without libraries. I was the sort of kid who devoured books, and my happiest times as a boy were when I persuaded my parents to drop me off in the local library on their way to work, and I spent the day there. I discovered that librarians actually want to help you: they taught me about interlibrary loans.”

Early Writing Career
Gaiman began his writing career in England as a journalist.  His first book was a Duran Duran biography that took him three months to write, and his second was a biography of Douglas Adams, ‘Don’t Panic: The Official Hitch Hiker’s Guide to the Galaxy Companion.’  Gaiman describes his early writing:  “I was very, very good at taking a voice that already existed and parodying or pastiching it.”‘Violent Cases’ was the first of many collaborations with artist Dave McKean.  This early graphic novel led to their series ‘Black Orchid,’ published by DC Comics.

The groundbreaking series ‘Sandman’ followed, collecting a large number of US awards in its 75 issue run, including nine Will Eisner Comic Industry Awards and three Harvey Awards.  In 1991, ‘Sandman’ became the first comic ever to receive a literary award, the 1991 World Fantasy Award for Best Short Story.