The Masseuse (The Body Works Trilogy #1)

by Sierra Kincade
Publication: 2nd December 2014
Publisher: Berkley Trade
Pages: 352
Genre: Contemporary Romance
Age Appropriate: Adult
Buy It: Goodreads + Amazon + Barnes & Noble.
First in the sexy and suspenseful Body Work Trilogy
Anna Rossi lives by one simple rule: don’t get attached, don’t get hurt. But Alec Flynn doesn’t play by the rules…
Anna never takes on a massage client without screening him first, but the paycheck offered by billionaire Maxim Stein is too good to turn down. Stein is the richest man she’s ever laid her hands on, and despite the risks, she trusts that she can take care of herself. After all, she’s handled difficult clients in the past. What she isn’t prepared for is getting caught in a compromising situation by Maxim’s tall, dark, and gorgeous bodyguard—or the desperate desires he awakens in her…
Alec is dangerous. The mysterious, hard-bodied man is completely irresistible and won’t be refused, no matter what walls Anna puts up to protect herself. But as Anna falls fast for his careful ministrations and mind-blowing skills, she begins to realize that giving herself over to a man with so many secrets isn’t just putting her heart at risk—it’s endangering her life…
My Thoughts.
There are just three letters you will need to describe this book H-O-T!

From the very first page I was caught up in this enjoyably steamy story.

The first meeting between Anna and Alec is quite funny, the chemistry and attraction between these two is combustible and I knew I was in for something great.

Anna is a masseuse, she is hired by the incredibly rich Maxim Stein, and through him she meets his bodyguard Alec and sparks fly, Alec pursues Anna and she soon succumbs to a relationship with him,  with both of them carrying secrets that keep them both from getting closer and which may ruin their romance before it's even begun.

I really loved this book, the love scenes are sizzling and the backstory is intriguing, plus with a mix of action and suspense you have so much happening in this story there's never a dull moment.

I look forward to the next book to continue on with Anna and Alec's story.

A great start to a new series. 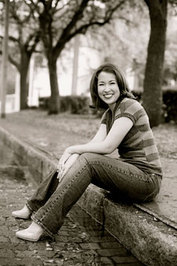 Sierra Kincaid lives in the Midwest with her husband and son. When she’s not writing naughty books, she loves eating chocolate cupcakes, binge-watching cable series, and singing loudly in the car. She wholeheartedly believes that love stories are real, and you should never choose a partner who doesn't make you laugh.
A few of Sierra’s favorite things:
Bad boys with dirty mouths – English Breakfast tea with two packets of Sugar in the Raw – any movie or show with a choreographed dance routine – cinnamon toast – kids who say funny things – friends who raid her pantry without asking – bootleg jeans – making lists – old Garth Brooks songs – and of course, massages.