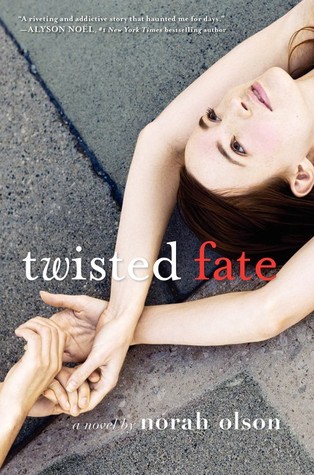 by Norah Olson
Publication: 20th January 2015
Publisher: Katherine Tegen Books
Pages: 272
Genre: Contemporary
Age Appropriate: Young Adult
Buy It: Amazon + Barnes & Noble + The Book Depository
When Alyson meets Graham Copeland, the new boy next door, she instantly feels like he’s a kindred spirit—shy and awkward like her, someone who has trouble making friends. It’s impossible to resist having a crush on him. As usual, her sister, Sydney, sees things differently. In Sydney's mind, Graham's odd personality and secretive past scream psychopath, not sweetheart. Her gut is telling her to stay away from him, and to protect a love-struck Alyson from her own naïveté. But despite her instincts, Sydney is surprised to realize that a part of her is drawn to Graham, too. And the more Sydney gets to know him, the more she realizes just how right—and wrong—she is about everything.Perfect for fans of Michelle Hodkin, and E. Lockhart’s We Were Liars,Twisted Fate is an unputdownable novel, teeming with suspense.
My Thoughts.
My first thoughts after finishing this book was "I'm So Confused", the big twist at the end wasn't really a surprise, I'd guessed it very early on in the story, what I don't understand keeping in mind the big reveal was how quite a few things were even possible, thinking about it after I'd finished reading left me bewildered to say the least.

This was such a great concept for a story it just wasn't executed well enough for me to be able to overcome the problems I had while reading this book.

I don't know whether the main characters were written to be unlikeable as they were, Graham is at the top of the list, nothing but a creep who somehow had two girls falling for him, I preferred reading the secondary characters POV's a lot more, but it got to the point where there were at least eight different characters POV's  throughout the story it seemed a bit too much, especially when some seemed to be repetitive, repeating the same thing over and over again.

I really wanted to enjoy this book, but unfortunately that wasn't to be, I also wish that the cover that is on the advance reader edition was kept the same for the finished copy, it was such a pretty cover.

In saying all that, this book is a very quick read though, you can get through it in one sitting.