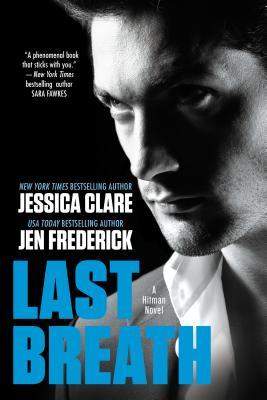 by Jessica Clare, Jen Frederick
Publication: 3rd March 2015
Publisher: Berkley
Pages: 368
Genre: Contemporary Romance
Age Appropriate: Adult
Buy It: Amazon I Barnes & Noble
From the bestselling authors of Last Hit comes the next in the steamy series that explores the exquisite power of our darkest passions . . .Regan : I never really knew what misery was until the day I was kidnapped and sold for being in the wrong place at the wrong time. Two months later, I’m at a brothel in Rio when I meet Daniel Hays. He says he’s here to save me, but can I trust him? All I know of him are his sarcastic retorts and his tendency to solve every dispute with his gun. He’s also the only safe thing in my world, and I know it’s wrong to fall in love with him, but I can’t seem to help myself. He says he’ll protect me until his last breath, but I don’t know if I should believe him or even if I can.Daniel: For the last eighteen months, one goal has dictated every action I’ve taken. I’ve left the Army, turned paid hit man, and befriended criminals all across the globe to find my kidnapped sister. In every brothel I raid and every human trafficking truck I stop, I hope the next face I find is my sister’s. In a hidden brothel in Rio, I find Regan Porter, bruised but not broken, and still sane despite her weeks in captivity. I should leave her behind or send her home, because the last thing either of us needs right now is to get involved. But with every passing minute, I find I’m less able to let her go.
My Thoughts.
I've been anxiously awaiting this book ever since I finished reading the first book Last Hit and fell in love with the story and the world it was set in, with the fate of Regan in question in the previous book I was desperate to get my hands on a copy of Last Breath and it definitely lived up to my expectations.

Regan has been sold to a brothel after being in the wrong place at the wrong time, after two months she's given up hope of ever being rescued, Daniel is hunting for his sister Naomi who went missing while on holidays and who was rumoured to have suffered the same fate as Regan, on his hunt he rescues Regan from the hellhole she's in, as they try to find their way out of Rio whilst searching for Naomi she will have to trust Daniel enough to keep her safe and maybe find a way to overcome the horrific abuse she has suffered and move on with her life possibly with Daniel.

I'm really enjoying this series, the books get better with each new release and I can't get enough!

Steamy, hot and sizzling, action packed with a storyline sure to keep you on the edge of your seat.

Jessica Clare has been an incurable romantic since childhood. She reads all the 'naughty parts' of books first, looks for a dirty joke in just about everything, and thinks to this day that the Little House on the Prairie books should have been steamier.

After devouring hundreds of paperback romances, mythology books, and archaeological tomes, she decided to write a few books of her own - stories with a wild adventure, sharp banter, and lots of super-sexy situations. She prefers her heroes alpha and half-dressed, her heroines witty, and she loves nothing more than watching them overcome adversity to fall into bed together.

Jen Frederick lives with her husband, child, and one rambunctious dog. She's been reading stories all her life but never imagined writing one of her own. Jen loves to hear from readers so drop her a line at jensfrederick@gmail.com.

Jen is currently working on a contemporary romance duology to be published in summer 2014 with the next Hitman book in the fall and the fourth Woodlands novel in late fall.