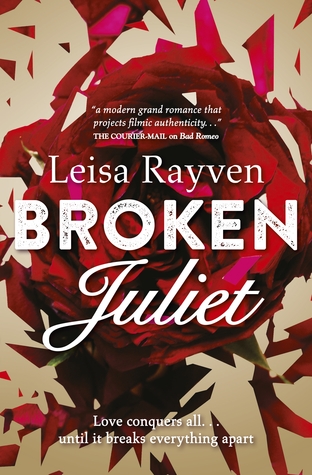 by Leisa Rayven
Publication: 1st May 2015
Publisher: Pan Macmillan
Pages: 320
Genre: Contemporary Romance
Age Appropriate: New Adult
Buy It: The Book Depository + Amazon
Cassie swore she'd never forgive Ethan for breaking her heart when they were in acting school years ago. He was her one great love, and when he refused to love her back, a part of her died forever...or so she thought. Now she and Ethan are sharing a Broadway stage, and he's determined to win her back. Finally he's able to say all the things she needed to hear years ago...but can she believe him? Has he really changed, and what makes this time different from all his other broken promises?The answer lies somewhere in the past, and now the truth will come to light.
Will Cassie rediscover what it's like to be trusting and open again-the way she was before Ethan? Or is it too late for these star-crossed lovers?
Don't miss this mesmerizing final chapter in the Bad Romeo duet, the unforgettable love story that captured the hearts of over two million fans online.
My Thoughts.
Broken Juliet is the second book in the Starcrossed series, picking up from the ending in Bad Romeo we finally get some understanding and closure to the rocky, heartbreaking and emotional love story of Ethan and Cassie.

Two soul-mates who endure a long and painful journey to find the happily ever after they both clearly deserve to find in one another, both drawn towards one another like moth's to a flame, no matter how much time goes by, you know they'll always find their way back to one another.

The character roles have been reversed in this book, in Bad Romeo Ethan is closed off, distrustful and feels unworthy of being loved, after suffering through two break-ups with Ethan, Cassie is now the same way, whilst Ethan finally got help for his problems and is in a far better place, now he's the one who is positive and sure of their relationship and what they could be together.

As per the first book we have two different timelines running throughout the story the present and the past of 6-5 years ago, giving the readers the story of their fledgling, floundering relationship and the choices good or bad that they made between them which brought them to where they are today.

I really enjoyed the way this storyline was wrapped up, the happiness I felt when I'd finally finished reading the book left me with a smile on my face and relief that Ethan and Cassie's story had ended in a way that I was really happy with.

If you're looking for an angsty contemporary romance read of the new adult persuasion then be sure to pick this series up, you can't go wrong.

Writing has always been a passion for Leisa, and even though she originally intended to be an actress, it wasn’t long into her time at drama school that she began writing plays.
Those plays were bad. Very bad. Well, her friends thought they were good, but that’s because they were always cast in them and any opportunity to be on stage was met with an obnoxious amount of enthusiasm.
Since then, she’s honed her craft, and several of her plays have been produced and toured
throughout Australia.
These days, playwriting has given way to fiction writing, and Leisa’s debut novel, BAD ROMEO, will be available in a worldwide release through Macmillan Publishing in December 2014.
Leisa lives in Australia with her husband, two little boys, three cats, and a kangaroo named Howard.
(Howard may or may not be her imaginary marsupial friend. Everyone should have one.)
Website • Twitter • Facebook • Goodreads
Posted by Unknown at 04:13