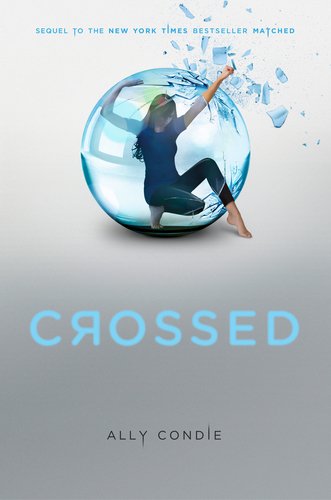 In search of a future that may not exist and faced with the decision of who to share it with, Cassia journeys to the Outer Provinces in pursuit of Ky - taken by the Society to his certain death - only to find that he has escaped, leaving a series of clues in his wake.

Cassia's quest leads her to question much of what she holds dear, even as she finds glimmers of a different life across the border. But as Cassia nears resolve and certainty about her future with Ky, an invitation for rebellion, an unexpected betrayal, and a surprise visit from Xander - who may hold the key to the uprising and, still, to Cassia's heart - change the game once again. Nothing is as expected on the edge of Society, where crosses and double crosses make the path more twisted than ever.
My Thoughts.
Being a huge fan of the first book in this series Matched I was excited to pick this one up and read it.
Cassia has been sent to a work camp in the outer provinces and separated from her family, while Ky has been sent to a village in the outer provinces with other aberrations as decoys where they are pretty much dropped off there to die.
As fate would have it a bunch of girls that are working in the same place as Cassia are told they're being sent elsewhere so Cassia gets on the plane in hopes they'll be dropped off somewhere near Ky, when they arrive she finds out Ky was there but he made a run for it with Vick and Eli in search of Cassia.
So Cassia along with Indie a girl from her camp escape as well and go in search of Ky.
Along the way we find out about a big secret that Xander has been hiding and Cassia wavers between Ky and Xander.
I loved the alternating chapters in this book so we get to read about what Ky thinks and we get an inside look at his past.
I  cannot wait for the last book in the trilogy to see how this story works itself out.
I give this 4/5.
Posted by Unknown at 05:15