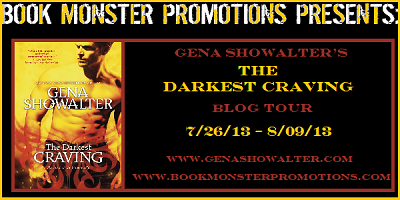 Having endured weeks of torture in the bowels of hell, Kane wants nothing to do with his beautiful rescuer, Josephina Aisling. The half-Fae female threatens to awaken the demon of Disaster inside him—a beast he’s determined to kill, no matter the price.

Josephina is hunted by a brutal enemy—her royal family—and Kane is her only source of protection. He’s also the only male to ever set her aflame, and even he succumbs to the heat. But as they navigate the treacherous world of the Fae, their love might just tear them apart...

TOUR GIVEAWAY DETAILS:
Gena is giving away the following prizes at the end of her tour:

RUNNERS-UP:  Two (2) runners-up will receive a paperback of THE DARKEST CRAVING


LORDS OF THE UNDERWORLD SERIES SPOTLIGHT:

Long ago, twelve immortals warriors – each more dangerously seductive than the last -- stole and opened Pandora’s box, unleashing the evil from within. Now they carry that evil within themselves. Violence, Pain, Death, Disease, Disaster, Misery, Doubt, Promiscuity, Defeat, Lies, Secrets, and Wrath. When a powerful enemy returns, they will travel the world in search of a sacred relic of the gods – one that threatens to destroy them all. The Darkest Night
LORDS OF THE UNDERWORLD Book #1

All her life, Ashlyn Darrow has been tormented by voices from the past. To end the nightmare, she has come to Budapest seeking help from men rumored to have supernatural abilities, not knowing she'll be swept into the arms of Maddox, their most dangerous member -- a man trapped in a hell of his own.

Neither can resist the instant hunger than calms their torments . . . and ignites an irresistible passion. But every heated touch and burning kiss will edge them closer to destruction -- and a soul-shattering test of love . . .
Though they carry an eternal curse, the Lords of the Underworld are irresistibly seductive -- and unimaginably powerful . . . The Darkest Kiss
LORDS OF THE UNDERWORLD Book #2

Though she has lived for centuries, Anya, goddess of anarchy, has never known pleasure. Until Lucien, the incarnation of death—a warrior eternally doomed to take souls to the hereafter. He draws her like no other. And Anya will risk anything to have him.
But when the merciless Lord of the Underworld is ordered by the gods to claim Anya herself, their uncontrollable attraction becomes an anguished pursuit. Now they must defeat the unconquerable forces that control them, before their thirst for one another demands a sacrifice of love beyond imagining.… The Darkest Pleasure
LORDS OF THE UNDERWORLD Book #3

Reyes is a man possessed. Bound by the demon of pain, he is forbidden to know pleasure. Yet he craves a mortal woman, Danika Ford, more than breath and will do anything to claim her—even defy the gods.
Danika is on the run. For months she's eluded the Lords of the Underworld, immortal warriors who won't rest until she and her fami ly have been destroyed. But her dreams are haunted by Reyes, the warrior whose searing touch she can't forget. Yet a future together could mean death to all they both hold dear.… The Darkest Whisper
LORDS OF THE UNDERWORLD Book #4

Bound by the demon of Doubt, Sabin unintentionally destroys even the most confident of lovers.

So the immortal warrior spends his time on the battlefield instead of the bedroom, victory his only concern... until he meets Gwendolyn the Timid. One taste of the beautiful redhead, and he craves more.

Gwen, an immortal herself, always thought she'd fall for a kind human who wouldn't rouse her darker side. But when Sabin frees her from prison, battling their enemies for the claim to Pandora's box turns out to be nothing compared to the battle Sabin and Gwen will wage against love. The Darkest Passion
LORDS OF THE UNDERWORLD Book #5

New York Times bestselling author Gena Showalter returns with another sizzling installment of the Lords of the Underworld series, as Aeron, keeper of the Demon of Wrath, dares to taste the forbidden .  .  .

For weeks, the immortal warrior Aeron has sensed an invisible female presence.  An angel--a demon-assassin--has been sent to kill him.  Or has she?  Olivia claims she fell from the heavens, giving up immortality because she couldn't bear to harm him. But trusting - and falling for - Olivia will endanger them all. So how has this 'mortal' with the huge blue eyes already unleashed Aeron's darkest passion?

Now, with an enemy hot on his trail and his faithful demon companion determined to remove Olivia from his life, Aeron is trapped between duty and consuming desire. Worse still, a new executioner has been sent to do the job Olivia wouldn't... The Darkest Lie
LORDS OF THE UNDERWORLD Book #6

In this riveting new installment of New York Times bestselling author Gena Showalter’s Lords of the Underworld series, Gideon, keeper of the Demon of Lies, fights to uncover the truth….

Forced to his knees in agony whenever he speaks the truth, Gideon can recognize any lie—until he captures Scarlet, a demon-possessed immortal who claims to be his long-lost wife.  He doesn’t remember the beautiful female, much less wedding — or bedding — her.  But he wants to . . . almost as much as he wants her.

But Scarlet is keeper of Nightmares, too dangerous to roam free, and a future with her means risking everything.  Especially as Gideon’s enemies draw closer . . . and the truth threatens to destroy all he’s come to love . . . The Darkest Secret
LORDS OF THE UNDERWORLD Book #7

Keeper of the demon of Secrets, Amun can manipulate the darkest thoughts of anyone nearby. But when new demons possess him, the immortal warrior must be chained and isolated to protect those he loves. Death is his only hope of release—until he meets Haidee, a fellow prisoner whose beauty and hidden vulnerability draw him into a reckless test of his loyalty…. Haidee is an infamous demon assassin, raised to despise Amun’s kind. Yet how can she hate the man whose touch sets her aflame? But to save him, she must give herself body and soul…and face the wrath of a powerful adversary sworn to destroy her. The Darkest Surrender
LORDS OF THE UNDERWORLD Book #8

The Lords of the Underworld return in this enthralling tale of an immortal warrior determined to win and the beautiful seductress he can’t resist.

Possessed by the demon of Defeat, Strider cannot lose a challenge without suffering unimaginable pain.  For him, nothing stands in the way of victory.  Until Kaia, an enchanting Harpy, tempts him to the razor’s edge of surrender.

Known among her people as The Disappointment, Kaia must bring home the gold in the Harpy Games or die.  Strider is a distraction she can’t afford because he as an agenda of his own – steal first prize, an ancient godly artifact, before the winner can be named.  But as the competition heats up, only one prize will matter – the love neither had thought possible… The Darkest Seduction
LORDS OF THE UNDERWORLD Book #9

Possessed by the demon of Promiscuity, immortal warrior Paris is irresistibly seductive—but his potent allure comes at a terrible price.  Every night he must bed someone new, or weaken and die.  And the woman he craves above all others is the one woman he’d thought was forever beyond his reach…until now.

Newly possessed by the demon of Wrath, Sienna Blackstone is racked by a ruthless need to punish those around her. Yet, in Paris’s arms the vulnerable beauty finds soul-searing passion and incredible peace. Until a blood feud between ancient enemies heats up.

Will the battle against gods, angels and creatures of the night bind them eternally– or tear them apart?