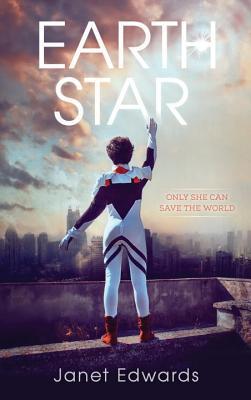 by Janet Edwards
Publication: 15th April 2014
Publisher: Pyr
Pages: 277
Genre: Science Fiction
Age Appropriate: Young Adult
Buy It: Amazon+Barnes & Noble+The Book Depository
Romance, science fiction, action, and a look at the false assumptions we make about others combine in this light-hearted, fun, and well-conceived science fiction future.Only She Can Save the World. Eighteen-year-old Jarra has a lot to prove. After being awarded one of the military's highest honors for her role in a daring rescue attempt, Jarra finds herself - and her Ape status - in the spotlight. Jarra is one of the unlucky few born with an immune system that cannot survive on other planets. Derided as an "ape"- a "throwback" - by the rest of the universe, Jarra is on a mission to prove that Earth Girls are just as good as anyone else.Except now the planet she loves is under threat by what could be humanity's first ever alien contact. Jarra's bravery - and specialist knowledge - will once again be at the center of the maelstrom, but will the rest of the universe consider Earth worth fighting for?
My Thoughts.
Earth Star is the second book in the Earth Girl series written my Janet Edwards.

I was a big fan of the first book in this series and I was eagerly awaiting this sequel to find out just what Jarra and Fian get themselves up to next, I'm happy to say that I wasn't disappointed one bit, full of the action, adventure and science fiction aspect that is the main component in making this series so enjoyable, this was a great addition to the series.

Back to their normal lives returning to their pre-history course and starting at a new dig site in Africa, Jarra and Fian are called in by the Military to assist in the Alien contact program, after an Alien sphere has entered Earth's orbit, without any communication from the sphere from the Alien's on-board the Military are taking no chances, tasked with researching the chance that this had ever happened before in Earth's history, Jarra is beyond excited to be a part of something that she always dreamed of but never thought would happen, being handicapped and not being able to portal to other planets because of her immune system, had put a stop to her hopes and aspirations, but when a command center is brought together on Earth to investigate the sphere she finally gets to live out her dream.

With the whole will they attack/won't they attack storyline keeping you on the edge of your seat, this book will keep you entertained the whole way through.

Janet's imagery and descriptions throughout this series has brought this world to life, with great characters and fabulous world-building, I'm eager to get my hands on the third and final book in this trilogy.

Janet Edwards lives in England. As a child, she read everything she could get her hands on, including a huge amount of science fiction and fantasy. She studied Maths at Oxford, and went on to suffer years of writing unbearably complicated technical documents before deciding to write something that was fun for a change. She has a husband, a son, a lot of books, and an aversion to housework.You are welcome to chat to Janet on twitter.