by Sarah Beth Durst
Publication: 14th October 2014
Publisher: Bloomsbury
Pages: 376
Genre: Fantasy
Age Appropriate: Young Adult
Buy It: Amazon  /  Barnes & Noble  /  Book Depository
Sixteen-year-old Kayla was born with the ability to move things with her mind-things like credit cards and buttons on cash registers-and she has become a master shoplifter. She steals to build up enough money for her and her mom to be able to flee if her dad finds them again . . . which would mean grave danger for them both. When she's caught stealing by a boy named Daniel-a boy with the ability to teleport-he needs her help and is willing to blackmail her to get it. Together, they embark on a quest to find and steal an ancient incantation, written on three indestructible stones and hidden millennia ago, all to rescue Daniel's kidnapped mother. But Kayla has no idea that this rescue mission will lead back to her own family-and to betrayals that she may not be able to forgive . . . or survive.
My Thoughts.
Chasing Power is an exciting and adventure-filled standalone novel, a tale filled with magical abilities with the sites of the world as it's setting.

Like a scavenger hunt only with ancient items that need to be found, it's a life and death situation where to lose is to gamble on one of our main protagonist Mum's life.

Kayla is a sixteen-year old girl who has a gift, she has telekinesis and has used her ability to steal, money, jewelery whatever she feels like, she takes what she can and saves it for the moment she and her Mum are on the run again, from her abusive Father, Moonbeam who we know as Kayla's Mum, doesn't know that she uses her ability, she has in fact forbidden her from using her telekinesis even in the safety of her own home, one day she gets caught by Daniel a boy who has an ability of his own, he can teleport and he desperately needs Kayla's help to rescue his kidnapped Mum, so after being blackmailed by him she agrees to help and it's here where the action starts.

There's never a dull moment, danger seems to be around every corner, and then there's a bit of romance thrown in as well between Kayla and Daniel.

This was the first book that I've ever read of Sarah Beth Durst, while I do own other books of hers I've yet to have the opportunity to pick them up, however after reading and loving this book I'll be sure to put them higher up on my tbr pile.

Sarah has created an extremely enjoyable tale, with engaging characters and a plot that will surely keep you on the edge of your seat. 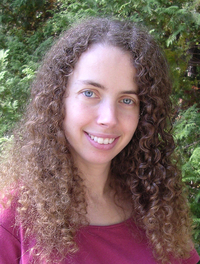 Sarah Beth Durst is the author of nine fantasy novels for children, teens, and adults, including Conjured, Vessel, and Ice. Her most recent YA novel, Chasing Power, came out in October 2014 from Bloomsbury, and her most recent book for adults, The Lost, came out in June 2014 from Harlequin/Mira. She was awarded the 2013 Mythopoeic Fantasy Award for Children's Literature and has been a finalist for SFWA's Andre Norton Award three times. She is a graduate of Princeton University, where she spent four years studying English, writing about dragons, and wondering what the campus gargoyles would say if they could talk. Sarah lives in Stony Brook, New York, with her husband and children. For more information, visit her at www.sarahbethdurst.com.

I am currently accepting ARCS and final copies for review.
If you're an author, publicist or publisher and would like me to review a book e-mail me at: sezjb81@gmail.com.
I will review Ya, New Adult and Adult in these genres: Paranormal, Historical, and Contemporary Romance, Fantasy, Dystopians, and Urban Fantasy (No Self-Help, Sci-Fi or Poetry books please.)