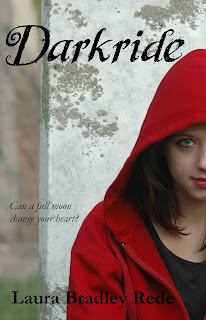 Publication: 20th December 2012.
Publisher: Independantly Released
Pages: 288
Genre: Paranormal Romance
Age Appropriate: Young Adult
Cicely Watson doesn’t believe in werewolves or vampires. She’s not even sure she believes in love. After all, she’s been in love with her best friend Ander for four years now and they’ve never so much as kissed. Every time they get too close, Ander runs away.  But when Ander stands her up on her sixteenth birthday - the same night Cicely’s mom is attacked by a mysterious creature in the woods - Cicely is determined to hunt down the truth, even if it means braving vampire blood-bars like the seedy but glamorous Nightlife, “where the waitresses are the drinks.” There, human thralls live to be bitten and the ultimate promise is also the ultimate threat: bonding, forming the magical link that joins vampire to thrall in life...and in death.
Ander McNair used to be the favorite son of a great monster hunting family - that is, until he was bitten by a werewolf and the hunter became the hunted. Now anything that makes his pulse race - even a kiss from the girl he loves - is enough to turn him into a beast.It’s a secret he intends to take to the grave but when the arrogant new guy at school turns out to be a vampire prince intent on killing Cicely, Ander’s family cuts him a deal: kill the vampire and he can earn his way back into the family and possibly even to a cure.It’s Ander’s best chance at being human again, but when Cicely and the vampire start to bond Ander is forced to make a choice between his past and Cicely’s future. Can a guy who isn’t even human learn what it means to be a man?
Luke Marianez remembers a time when vampires were immortal.That was before the witches and the hunters united to curse the vampires with the ability to die.Now it’s Luke’s job to hunt down Cicely Watson, the last descendant of the witch who cast the curse, and kill her so his kind can live forever. But for Luke, it’s not enough to stop Cicely’s heart.He wants to break it first, the way her ancestress broke his a century ago.But as he tries to seduce Cicely, Luke finds himself falling in love. Is history destined to repeat itself? As one of the thralls at the Nightlife says, “The haunted house is a darkride, but so is the tunnel of love. Life’s like that, too. You never know if you'll get Cupid's arrow or the vampire's fangs. Or, if you're lucky, both."
My Thoughts.
Cicely has been in love with her friend Ander for years but everytime she brings it up he changes the subject, and whenever Cicely and he have plans a lot of the time he never shows up that's because Ander is a werewolve and every full moon he shifts and also whenever his emotions get heightened.
Ander is also in love with Cicely but doesn't want to hurt her so he says nothing, he trys to keep his shifts under control with a potion made by his vampire guardian but it doesn't always work.
Then one night Ander smells a vampire and chases after him and in the process plows into Cicely's mum's car injuring her, meanwhile the vampire he was chasing Luke, is in town to sacrifice Cecily so he and all vampire's can get their immortality back, Cicely is an ancestor of a woman that put a curse on Luke and all vampire's that make them easy to be killed.
So we end with a love triangle with Luke falling in love with Cicely as well, and we have Ander's brother's turning up his family are hunter's and make a deal with Ander that if he kills Luke before sacrificing Cicely on All Hallow's Eve they'll give him a cure from being a werewolf.
With a love triangle between a human, werewolf and a vampire, a lot of action and a great ending then this is the book for you.
I hope there are more books after this.
I give this book 4/5.
A big thanks to the author Laura Rede for allowing me to read and review this book.
Posted by Unknown at 06:35