How to Survive the Titanic or the Sinking of J. Bruce Ismay 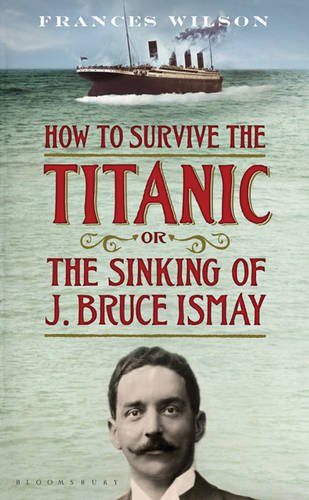 Publication: 1st September 2011
Publisher: Bloomsbury Australia
Pages: 328
Genre: Historical, Non-Fiction
Age Appropriate: 15+
When the Titanic sank, J. Bruce Ismay, the ship's owner and inheritor of the White Star fortune, jumped into a lifeboat with the women and children and rowed away to safety. Hated for being a coward, his reputation never recovered.

Author Frances Wilson explores the reasons behind Ismay's jump, his desperate need to make sense of the horror of it all, and journey to find a way of living with lost honour.
My Thoughts.
Before I start this review I have to say that I'm a huge Titanic fan, if I ever see a book I don't have I buy it even if it's the same story over and over again.
I was so excited when I received this book to review it was about the Titanic and I was always interested to know what happened  to Ismay after the sinking of the Titanic and the American and British Inquiries into the sinking.
Unfortunately I wasn't a big fan of this book at all, the parts about the Titanic and Ismay were good, but then for some unknown reason the author decided to compare Ismay's life to some story called 'Lord Jim', and then proceeded to it seemed, put the whole story into the book (which I wasn't even remotely interested in) then after as if that wasn't enough, then decided to give us the life story of this guy who wrote the 'Lord Jim' story and after that his bibliography, everytime it came to one of these bits (and they're spread out throughout the book, so it's not like you could skip a chapter or whatever) it got to the point where I was like not this again, it was too much and didn't really have anything to do with the story.
But there were some good bits, I learned Ismay grew up in a household with a Father who didn't like his kids, and subsequently Ismay treated his own children the same way, he had fallen out of love with his wife after the death of their oldest son and while on the Titanic, seemed to fall in love with one of the 1st class passengers Marian Thayer.
We read about how he contradicted himself quite a few times at the inquiries and after never ever spoke of the Titanic again.
It's hard to say whether Ismay deserved to be the scapegoat that he became after the sinking, he says he got into the lifeboat because there were no other women or children around, other's say he was forced into the lifeboat but we do know around 1,500 people died that night and he could I'm sure easily have found women and children somewhere on the ship to take his spot in the lifeboat.
But it's something we'll never know, only the people there that night knew the truth, it's something that will forever remain a mystery.
I give this 2.5/5
A big thanks to Sonia @ Bloomsbury Australia.
Posted by Unknown at 18:23