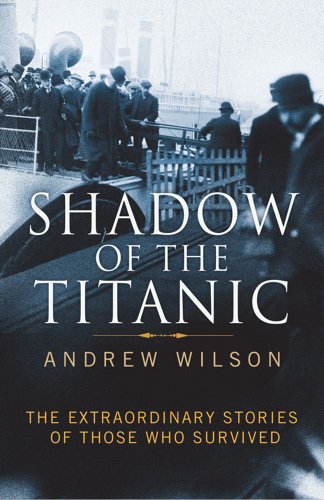 Shadow of the Titanic: The Extraordinary Stories of Those Who Survived

In the early hours of 15 April 1912, after the majestic liner Titanic had split apart and the 1,500 men, women and children struggled to stay alive in the freezing Atlantic, the sea was alive with the sound of screaming. Then, as the ship sank to the ocean floor and the passengers slowly died from hypothermia, a deathly silence settled over the sea. Yet the echoes of that night reverberated through the lives of each of the 705 survivors. Shadow of the Titanic tells the extraordinary stories of some of those who survived. Although we think we know the story of the Titanic - the famously unsinkable ship that hit an iceberg on its maiden voyage from Britain to America in April 1912 - little has been written about what happened to the survivors after the tragedy. How did the loss of the ship shape the lives of the people who survived? How did those who were saved feel about those who perished? And how did they remember that terrible night, in effect a disaster that has been likened to the destruction of a small town?Timed to coincide with the 100th anniversary of the sinking, SHADOW OF THE TITANIC will shed new light on this enduringly fascinating story by showing how the disaster continued to shape the lives of a cross-section of passengers who escaped the sinking ship.
My Thoughts.
I've said before that I read anyhting to do with the Titanic and this book was so good.
We all know that the Titanic sank on the 15th April 1912, we know that 1,500 men, women and children died that night, but what we don't really know is what happened to the survivors after the ship sank.
This is one thing I've always been interested in, peoples lives afterward and they're not really happy stories.
A tremendous amount of people refused to speak of the Titanic ever again, some people ended up killing themselves, others ended up in mental institutions and some who suffered mentally for the rest of their lives.
Some people lost all their possessions and were left with nothing but the clothes on their backs, some wrote books about the sinking and some appeared in movies about the ship.
There were some people who used the tragedy as their turn to shine in the spotlight, but it wasn't all doom and gloom some people after losing their respective others found love with other survivors on the ship.
But it all comes down to this the Titanic was one of the biggest tragedies the world has ever seen, and a lot of survivors lives became tragedies as well after the sinking, but perhaps that's why the world is still so intrigued with the Titanic nearly one hundred years later.
I give this 4/5
A big thanks to Caroline @ Simon And Schuster Australia
Posted by Unknown at 17:45