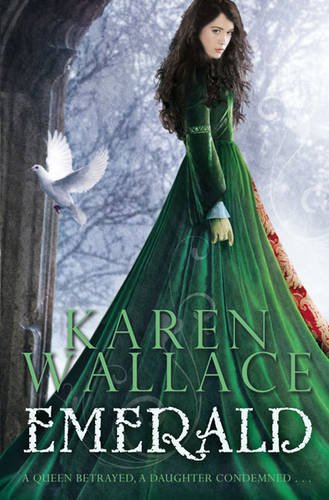 by Karen Wallace
Publication: November 1st 2011
Publisher: Simon And Schuster Australia
Pages: 277
Genre: Historical Fiction
Age Appropriate: Young Adult
Price: $16.99
Emerald St. John is in trouble. She has been condemned to marry a man she hates. Her enemies are conspiring to have her pet bear Molly torn apart in the baiting pits, and the man she loves is far away on the high seas. And she has stumbled into a web of spies with a plot to poison Queen Elizabeth I. To save herself and the kingdom, she must beat the spies at their own game - which means transforming herself from a country girl into a Court lady. Can she do it in time? Set against a detailed and vivid recreation of a great Elizabethan manor house, EMERALD will bring to life a world where the most sophisticated rules of etiquette went hand in with brutality and superstition.
My Thoughts.
Emerald is an historical novel set in Elizabethan England.
When Emerald's father dies she and her brother Richard are sent to live with their Aunt and Uncle at Hawkstone Hall.
Emerald is seven when she's sent away and can't understand why she can't stay with her mother.
The story moves ahead to Emerald at the age of 16, her brother Richard is at sea, she doesn't get along with her cousin Arabella and the only person she's close to is her Aunt Frances who is like a mother to her.Her mother (whom Emerald hasn't seen or heard from since she was 7)  sends a letter to her Uncle Charles to inform him that she has arranged a marriage between  Emerald and a Lord Suckley (an old hideous man in appearance and character).
Of course Emerald does not want to marry Lord Suckley but no one will listen to her.
There are minor characters in the book I love Meg who works in the kitchen, who has a habit of hiding under tables and listening in on private conversations, and Sarah a servant who grew up with Emerald.
She falls in love with Sam a swashbuckling friend of her brother's, who I loved.
And underneath it all is a plot brought about by Emerald's mum which is the reason she's being married off to Lord Suckley.
So if you like 16th century tales with mystery,romance, spies, deceit and quite a lot of twists and turns to keep you on your feet then please read this book.
I give this a 4/5
A big thanks to Caroline @ Simon And Schuster Australia.
Posted by Unknown at 19:44